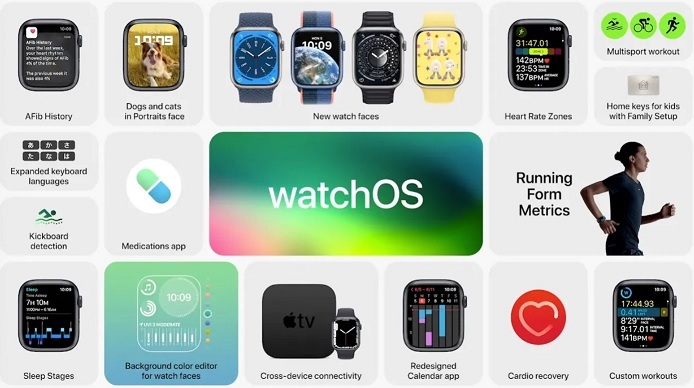 With a host of brand-new features and updates, including better battery life, the ability to download music without using a magnetic charger, and more.

The latest software is being sent by Apple to compatible Apple Watch units with a build number of 20S75. This incremental update takes up 596MB to download, just like the preceding ones.

You can update your watch to the updated software if you have an Apple Watch Series 4 or later model.

With regard to improvements, watchOS 9.1 brings a number of new features, such as the ability to download music while the Apple Watch is not connected to a charger using WiFi or cellular.

Other features include battery life enhancements for outdoor walking, running, and hiking workouts on Apple Watch Series 8, Watch Ultra, and Watch SE 2, and the Matter integration.

These are the Issues that WatchOS 9.1 Fixes:

====> Hourly weather difficulties could mark times as AM when they are actually PM.

====> When getting many alerts, Voice-over might not read the app name before reading the notification.

====> The voice feedback for the average speed during an outside run can be wrong.

====> For some users, the time displayed during the strength training workout may not advance.

====> Estimates of the likelihood of rain in your present location in the Weather app may differ from those on your iPhone.

Who Can Install watchOS9.1?

Unfortunately, watchOS 9 and watchOS 9.1 cannot be installed on every Apple Watch. Only Apple Watches released in 2018 or later can use the newest operating system.

As a result, the Apple Watch Series 3 and earlier models are no longer eligible to download watchOS 9.1.

The Apple Watch will automatically install updates like this one for the majority of customers. However, you may force the update using the Apple Watch’s settings menus if you don’t want to wait.

Step 3 ====> Then, make sure your Apple Watch is charged to at least 50% and connect it to the magnetic charger

Step 8 ====> Now, you need to enter your iPhone Passcode when prompted

Step 11 ====> Finally, you need to enter your Passcode on Apple Watch

You only need to do that for your Apple Watch to automatically update. Before beginning the update, verify that the watch is charging or that the battery has reached at least 50% of its capacity.

How to Connect JBL Speakers to iPhone

How to Connect JBL Speakers Together?

How Do I Reset JBL Speaker?

Save Some Battery Life with Watch OS 9.1

The new battery life boost with watchOS 9.1 is probably the most notable adjustment. The majority of customers want their smartwatches to have all-day battery life, so this update should be helpful.

Use the above instructions to force the newest watchOS update on your own Apple Watch if you haven’t already.

If you have ever been annoyed by how long it takes to download and install an update for your Apple Watch, you should be aware that shutting off Bluetooth at the appropriate time may help to expedite the procedure. However, I would advise against it.

Although it’s possible that the procedures below will work perfectly, if you time them even slightly incorrectly, it might have negative effects on both your installation and your Apple Watch as a whole. You can use this strategy at your own risk if you’re sure in your ability to time everything perfectly.

Step 1 ====> If/when prompted, enter the passcode for your iPhone or Apple Watch.

Step 2 ====> After you see a time estimate for your watchOS download on the Software Update page, open Settings on your iPhone.

Step 4 ====> Turn off Bluetooth by tapping the switch until it is in the white “off” position.

Step 6 ====> When prompted on the Software Update page, select Cancel. If everything was done correctly (again, not guaranteed), your iPhone will default to delivering the update through your home Wi-Fi network rather than Bluetooth.

Step 7 ====> On your iPhone, tap Settings following the appearance of the Install button at the bottom of the Software Update page.

Step 9 ====> Turn on Bluetooth by tapping the switch until it is in the green “on” position.

NOTE: I would strongly advise against doing this as it could seriously interfere with the upgrade.